Just because it is such a beautiful member of the grass family and has a real calming effect on you once you set your eyes on it. Try it out here and maybe learn something new.

For example, do you know where wild barley (Hordeum spontaneum, Gerste) originates from? Have a guess.

Wikipedia tells us that its origin lies in the so called Fertile Crescent (in German: Fruchtbarer Halbmond). An area shaped like a crescent in the Middle East. It covers regions in today’s countries of Iran, Irak, Syria, Turkey, Lebanon, Palestine, Israel, Jordan, and Egypt.

It is believed that wild barley was domesticated in this region around 10‘000 years ago. Today we know its domesticated form Hordeum vulgare the world over. 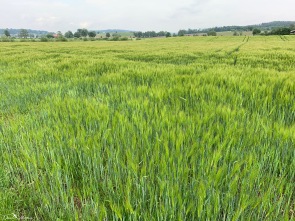 Whenever I see a field of barley, I have to stop, touch the grass and enjoy its movement in the wind. Today I feel like sharing this sight with you and hopefully, you can sense the relaxing effect through these pics and videos. Turn on all your senses!

Did you feel the long beards in your hands? They are the longest in the cereal grain grasses. 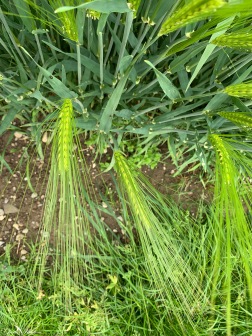 Next up, see a little helicopter manoeuvre through the barley, in slow motion.

Have I convinced you of barley‘s beauty? Hip hip hooray :-)!
If not yet, my last image hopefully will…

Relaxed and a fan of barley ;0)? Good on you. Now spend some time outside and enjoy the little things that surround you.